On Imperfect Eating – Or, An Argument For Cake 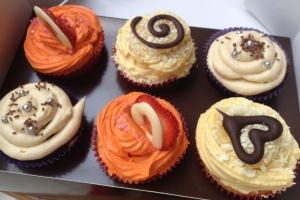 And on the proposing side of the motion – cupcake selection boxes..

Here’s a few scenarios we’ve likely all been a part of, centrally, or peripherally.

There’s the group at the restaurant, an evening out to unwind, that turns – by stealth – into a subtle and resolutely unspoken competition between the women at the table. Who’s not eating bread, or pasta – who can pass off the most of the contents of their plate on their boyfriend? Who has eaten earlier and doesn’t particularly want more than two bites? Everybody remarks loudly and conspirationally on how full they are, once half (or less) of their main meal is dispatched. Four people can share a dessert, can’t they…? Most don’t want it, at all. Enjoyment of the night, and the food, erodes into a discomforting, uneasy struggle to eat without judgment and enjoy the calm of a night off.

There’s the character who never takes the biscuits at the office; politely declines offers of drinks on a Friday afternoon, in order to while away hours in the gym, and takes great pains to ensure that any food intake is monastic, rigidly nutritious and (generally) partaken of alone.

There’s the friend who can never eat a cookie without guilty speculation about the need to exercise it off; or the acquaintance who hasn’t eaten a carbohydrate since 1994. There’s the girl who is so overweight that she cannot walk without her legs rubbing painfully together, for whom lunch break is a nightmare of both imagined and real judgment, prejudice and awkwardness. 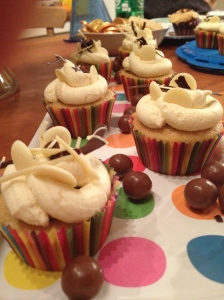 Oh, thank you, but I’m on the juicing diet.

It’s as rare as hen’s teeth to find somebody whose attitude to food is unaffected. Amongst girls, women and increasingly amongst boys and men, to be conscious of, guilty about, disciplined with and/or conflicted around food is normal.

It’s one of my favourite subjects to chew on, and undoubtedly that’s true for more people than I may know. Everything around it, from the history of how we got here to the challenges, woes and trouble it can create – it’s fascinating stuff. It’s also incredibly frustrating, and more often than not upsetting and disheartening. Anyone who has ever seen a friend pick holes in their appearance, or a sibling refuse to eat dinner, will know that.

Eating disorders are reported to have a low prevalence, with less than one percent of the UK being diagnosed with anorexia nervosa (just for example). However, disordered eating – of which there is a wide spectrum – seems to be popping up with greater frequency and persistency. As in my first paragraph’s scenario, above, there are ways in which it can become an unavoidable part of female experience.

Despite intermittent spates of backlash and half-hearted protest against the idealization of the very thin, skinny continues to have clout. As nearly every culture journalist in the past ten years has noted, finding a woman who doesn’t firmly believe she could do with losing some weight is like discovering a unicorn. Increasingly, it’s a man thing, too, bodily dissatisfaction – I’ve lost count of the number of men, of all body sizes, who’ve mentioned or confided to me that they would like to be a different shape (smaller, larger, more muscled) than they are.

Most men and women dabble in food rules every day. Protein for fuel; don’t eat lunch; take half the bread off your sandwich, eat every three hours, eat two meals a day, avoid sugar, cut the caffeine, stay organic, shop local, get your enzymes, check your labels, skip dessert.

Before I go any further – and find myself murdered by indignant dieticians – may I say that I am absolutely in favour of being educated, aware and savvy about one’s food in terms of its provenance, macros, health benefits and limits. Coeliacs aren’t just making up excuses to cut the cake. Ethically driven vegans aren’t eliminating butter and cheese to drop a few pounds.

I cannot and do not dismiss the politics of healthy eating, or eating ethically. That would be ridiculous, and hypocritical. I find it sad (at times) that it’s something that has become necessary to learn about, as opposed to intuit, but then this necessity is a product of an over-provided-for society where it’s easier to experience malnutrition by excess than by limitation.

My fight here isn’t with being educated about food, because ignorance (in any aspect of anyone’s education) is definitely not bliss. My bone to pick is with the mania of anxiety, worry, rigour and uncertainty around food and food choices that sucks the life and joy out of eating for too many of us, too often. In particular, there is the flipside to this food paranoia, which we tend to shut away or hush up – that the most rigid of diets and regimes lie on the other side of the same coin as bingeing and self-destructive over-eating. Both phenomena share the same root, which is a broken relationship with eating and distorted self-love and self-respect. (Please note that as an Irish person, writing the phrase ‘self-love’ made me snort and get internally very sardonic, but it stays because there’s no other way to properly describe it).

…I’ve made nearly every mistake that’s humanly possible when it comes to food, so I can lay claim to being at least half-qualified in my argument here. I lost any semblance of a natural and untroubled relationship with food at the age of about twelve, and I have a very distinct memory from about age six of looking in the mirror and feeling convinced that my legs were too fat. I’ve eaten far too little, been medically underweight and extremely unwell; I’ve eaten far too much and done all types of obsessive and unhealthy things to exorcize the resulting guilt.

I’ve been a faux coeliac, a pescatarian, a vegetarian; I’ve dabbled with (and gained encyclopedic knowledge about) restrictive eating of every imaginable variety. I’ve lived on an apple and tuna a day, every day, for weeks; I’ve eaten an entire cake in one go. I’ve spent years and years unhappy, vacillating between berating myself, punishing myself with the newest unimaginably limited and repetitive plan to drop weight and, inevitably, later, eating like there was no tomorrow.

My light bulb moment happened slowly, but surely. The biggest part of returning to the type of eating that let the joy back in was the realization (and acceptance of) the fact that terror of food and dislike of my body was not the golden ticket to healthy eating. It had to do with cottoning on to the fact that ‘perfect’ eating was something that sat hand in hand with guilt binges and secret stashes of chocolate.

It had to do with eating a slice of cake – maybe at the table, with family, or friends – and letting that be okay. Going for a burger for the first time in a decade and not abandoning the bun in a fit of shame. Calming down about the macro rulebook and trying what looked good, without the guilt and squeamishness about sugar and the looming danger of a fat stomach. 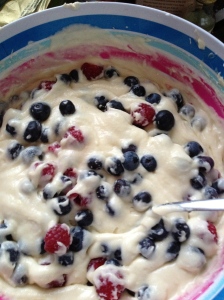 It’s about making cupcakes out of a batter that looks this damn glorious in the bowl..

Western culture (and medicine) frequently underplays the connection between mind and body – the effect of attitude and mental state on physical function. Eating pasta like I wasn’t convinced it would kill me the next morning – the supposed bloat I had always been so sure would happen before didn’t happen. As I became better and better at assuring myself that eating what looked good was not going to cause the end of the world, I gained a diet that involved significantly more ice cream, brioche, burgers and chocolate – and significantly less paranoia about fat, bloat, and the terror of judgment. I kept up a long-term habit of working out with weights, and in the cruelest of ironies, lost some body fat without effort, restrictiveness or consciousness for the first time in my life.

This is my argument for imperfect eating, on behalf of cake (or cookies, or brownies, or macaroons)…attitude to food, and to ourselves, is what makes the difference. We all need to stop tying ourselves in knots quite so much. Take a step back from the storm-clouded contents of modern food culture – have a giggle, have a think. Yes, there are arguments that we shouldn’t eat what we couldn’t kill or dig out of the ground – Thankyou, paleo. A system of eating like this is undoubtedly nutritionally excellent, too – I would never disagree with anybody who would say as much. 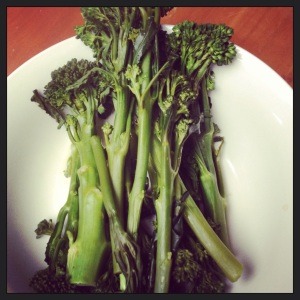 Also, tenderstem broccoli is probably one of the best things on earth – ain’t no denying that.

I just also quietly happen to think that we need to eat for more than just a macro ratio and physical health. We eat for our souls, our relationships and our pleasure, too. As a species we were ingenious enough to actually invent a method to combine and heat flour, sugar, butter and eggs to make one of the best tasting things on earth. Why would we abandon centuries of culinary exploration and achievement because carbohydrates are our latest devil? Ridding ourselves of the shame and fetishization of the forbidden might do much more for our collective health. Moderation grows when we don’t follow a diet forbidding sugar – don’t think about the white elephant, remember? When we know we’re perfectly entitled to whatever we might come by at a bakery, the beautiful irony is that we become much less prone to a cycle of over-eating and self-retribution.

That’s my two cents, for the time being. I open the floor to debate.

Have a picture of some mango & white chocolate banana bread for your thoughts.

A depiction of the devastating after effects of a diet that includes cake. Also included: cute dogs.

Look up an Ingredient:

I Write About This Stuff

Error: Twitter did not respond. Please wait a few minutes and refresh this page.